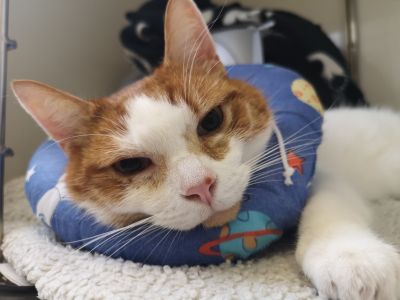 The names of some diseases can be quite misleading – sometimes all may not be as it seems with a diagnosis. That was the case with Gary the 8 year old moggie, who turned out to have contracted an uncommon skin condition called cowpox, probably from a rat!

There can’t be many cats up and down the country that come to the name ‘Gary’ but this one does, and he suits his name as quite the happy chap. But Gary’s owners became concerned when he started to lose hair on his back legs and feet, and brought him along to the practice. He wasn’t particularly itchy, either. Hair loss is quite common in cats, and is usually due to a flea infestation or stress. Gary was thankfully up to date with his flea protection and was a very relaxed cat, with no recent history of stress in the household. Besides all that, the location of his hair loss was rather unusual – involving mainly his back feet, and there were quite a few crusty lesions here. Flea infested cats most commonly lose hair over their back, whilst stressed cats tend to overgroom around their belly and inner thighs.

Due to the unusual presentation of his condition, Gary was recommended to undergo a skin biopsy, which his owners were keen for. The following week, Gary was admitted to the practice in the morning for a short general anaesthetic in order to biopsy the worst affected areas of skin. Small, circular bites of skin were removed and placed into tubes of formalin that were to be sent to the lab. Gary recovered well from his procedure and went home with a special inflatable collar around his neck to stop him interfering with his lesions and biopsy sites, and his owners would eagerly await the pathology results which were expected within five days.

Gary’s results were very interesting – the changes within his skin were suggestive of a disease called ‘cowpox’. Despite the name, this is a type of virus that is usually spread by rodents, which cats can contract with a bite, and for this reason symptoms usually affect the lower legs. He also showed signs of secondary bacterial infection, and required a course of antibiotics. However the cowpox virus didn’t need any treatment and would be expected to self-resolve – the focus would be on controlling secondary infection, preventing further self-trauma and avoiding spread of the virus.

It was important to be aware, however, that in very rare circumstances this disease could develop into pneumonia, and that in even more exceptional circumstances, could in theory spread to people (but according to some sources only 54 cases have been diagnosed in the last 25 years). Usually this would only affect immunocompromised people, and if so most likely just result in a rash, however it was important for Gary’s owners to be aware of this fact and take care to unfortunately avoid stroking Gary for a while and take time to wash hands regularly.

Fortunately, neither did Gary’s owners develop symptoms, nor did Gary himself go on to develop any further problems. After completing his antibiotic course, his crusts gradually all disappeared and his hair was starting to grow back well. After a few weeks, Gary was able to have his collar off, be stroked and fussed again, and could relax in the knowledge that his strange cowpox virus had eventually resolved!