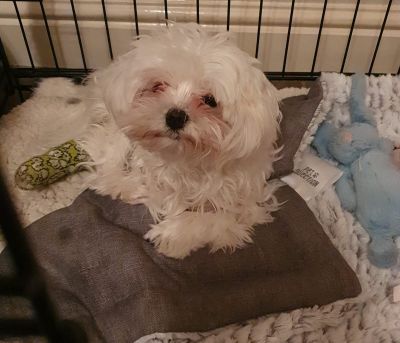 Weighing in at 2.5kg each, Sasha and Sophie the 9 month old Maltese Terriers are small in size but big in character. Despite their fine and delicate features the two of them love to bustle around and play rough and tumble, much to the concern of their doting owners who are continuously worried about them.  In general all has been fine but on one occasion there was one tumble too many and suddenly Sasha found it difficult to walk.

Sasha appeared to have a very sore back leg and her worried owners rushed her straight in to us.  Her leg was clearly painful when moved and flexed but we could find no evidence of any big breaks. As Sasha was still high in spirits we decided to give her some pain relief and see if her leg would improve after 24 hours of resting up. However, with only limited improvement Sasha was soon back to see us sand it was clear that we needed to progress to x-ray.

The x-ray showed us the problem straight away. She had an injured knee, with the growth plates at the top of her shin bone having become separated and displaced. Young patients that are still growing have centres of growth, known as bone plates, at the ends of their bones, where new bone cells are produced and laid down to cause elongation of the bone. This is a very active and soft area of bone that closes, with bone production stopping, once the skeleton has fully grown. Most bone plates close by around 12-14 months of age or before. However, until then they are a very important region of the bone and so, if they become damaged, it is vital they are repaired quickly, and effectively, to avoid long term joint problems and issues with skeletal growth.

We needed to act quickly and so Sasha’s surgery was scheduled for the following day to allow for the necessary implants to be delivered. At surgery we managed to relocate the displaced bone and then put a series of metal pins and orthopaedic wire in place to secure its position.  X-rays taken after the procedure showed that we had achieved our intentions and a soft supportive dressing was put on to minimise swelling and provide a bit of support.

Sasha was discharged with instructions that she must be strictly rested to allow her bone to heal properly.  Now that her leg was stable again she didn’t look like she had any intention of staying still but her owners did a great job of confining her and preventing any undue stress being put on the repair.  We monitored her on a weekly basis and, after approximately four weeks, she was back in to have repeat x-rays.  Being so young she was lucky that her fracture had healed rapidly and, as we didn’t want the implants to affect the growth plates further,  we were glad to be able to remove all of the pins and wire from her leg.

Sasha was fortunate that the care of her owners, both immediately after the fracture happened and again with her strict management after the repair, meant that she came through this unscathed. Indeed her leg is like new and she’s happy to be finally allowed to play again with Sophie, her partner in crime!