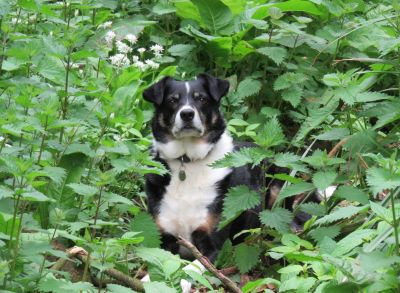 Sometimes things are not as they seem the first time an animal is brought into a vets. On occasion, vets can give a good guess as to the potential diagnosis before an animal walks through the door, based on symptoms and a history over the phone. However, sometimes like in Sam the border collie’s situation, the most obvious answer isn’t actually the case at all.

Sam’s owner was understandably concerned when smelly breath and bleeding from his gums were picked up on at home. An appointment stating as much was booked at the practice. At 12 years old, Sam is an older collie, and dental disease is common amongst geriatric patients, which would usually provide a good explanation for his symptoms. In addition to this, Sam lives on a farm and has been seen to scavenge when being naughty – just a few days before he was seen to be tucking into a carcass. Perhaps trauma and infection to the mouth due to this was responsible for his presenting complaint instead? Or had he eaten a large amount of rat bait – the toxic effects of which can cause bleeding – after all, there may often be some encountered out on farmland. The reality in fact was altogether different, but involved a thorough examination and investigation to rule out other possible causes.

Upon his examination at the vets, Sam was seen to be bright and well, however there was notable blood and a smell emanating from his mouth. Despite his age and first assumptions, his teeth were in great condition. Some of the blood was fresh, indicating an active bleed, but some blood had been in his mouth for a while, generating a smell. There were no signs of trauma or damage to his mouth, but there were little red spots seen throughout most of his gums once the blood was wiped away. Not only this, but similar pin prick red lesions were noticed on his tummy.

An interesting picture was developing with Sam; these lesions appeared to be a phenomenon known as ‘petechiae’ – miniature bleeds under the skin or gum indicating a clotting problem – unfortunately despite this important but uncommon presentation, this was also quite a concern for Sam, and although he was bright and well currently, things had the potential to quickly change, so further investigations were needed immediately. To start with, a blood sample was taken, to not only check his overall underlying health, but also his level of red cells for any anaemia, his clotting factors, and for a count of his platelet number – the type of cells involved in clotting. Whilst awaiting the results, Sam was monitored closely at home.

Interestingly, Sam wasn’t anaemic and was in overall good health. His clotting factors were of an acceptable number too, which meant he was unlikely to have stolen any rat bait. However, his platelet count was very, very low indeed. This represented a condition known as ‘thrombocytopaenia’ – a low level of active platelets in the blood – these are needed to help form a clot and stop bleeding in its tracks, so this explained Sam’s symptoms. This was likely an immune-mediated condition, meaning that it was brought on by the body itself, but the question now was – is this a primary issue, or secondary to another disease?

Sam was started on medication to help counteract and suppress the immune system – steroid tablets at a high dose, and was monitored for improvement at home before investigating underlying disease and rechecking his platelet count later on. Bright and well in himself up until this point, now Sam started to feel really unwell; he was lethargic and weak. The next question was whether this was due to underlying disease to his thrombocytopaenia , or a side effect to his new medication.

To look for causes for his low platelets, a search needed to be conducted for cancers – the most common type of trigger in this case. This involved having Sam back in to the practice for imaging – X-rays of his chest and an ultrasound scan of his belly.

Fortunately, his tests came back all clear and his platelet numbers had risen to normal levels on his second blood test. This meant that his steroid dose could slowly be weaned down, and if his newest symptoms were side effects, they would hopefully improve. To everyone’s relief, Sam started to improve again well, and as his steroid dose was continually dropped down, his platelet numbers remained stable too. Currently Sam is doing very well, and is being monitored for any relapses or underlying conditions as his medication becomes tapered off completely.