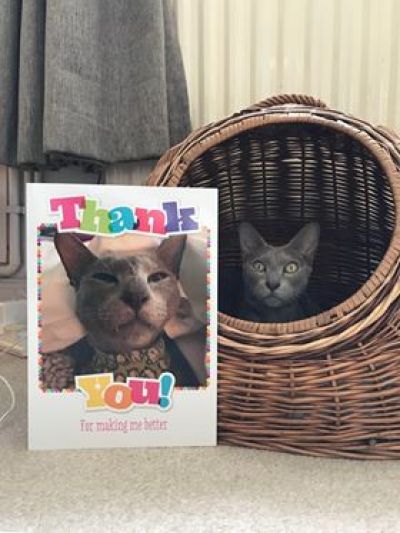 Marvin, or Marvin the Marvellous to give him is full name, is a 6 year old Havana that is a bit of a local character. Naturally curious in nature, Marvin is known to many of the neighbours due to his inquisitive tendencies and ability to make himself comfortable where ever he should decide to visit.  However, he always returns home where, at least in his mind, he very much rules the house,.

Needless to say Marvin has a routine and when he started to refuse his food his owner knew something wasn’t normal. He was brought in to the practice and, on first examination, there wasn’t much that we could find. He received some anti-inflammatory treatment and was sent home for his owner to observe his progress.

His owner knew his routine inside out and, the next day, Marvin was still not his normal self.  If anything he looked an bit more subdued than the day before and so he was brought to the surgery again.  Once again nothing obvious was showing but it was clear that he was quieter than usual and so it was agreed that he should be admitted, have blood tests taken and be placed on an intravenous drip to ensure he was well hydrated.

The initial blood tests showed only minimal changes and so further tests were sent to a specialist lab. However, as the day progressed to the early afternoon, the nursing team felt Marvin was starting to look a little yellow in the skin around his eyes. By late afternoon there was no doubt; Marvin had become jaundiced.

Jaundice is caused when yellow pigments build up in the blood. These pigments, which are derived from red blood cells, are usually filtered from the blood by the liver into bile, which is stored in the gall bladder and then flows to the gut to be excreted. A number of different problems can cause jaundice, including increased breakdown of red blood cells, liver disease or an obstruction to the flow of bile. So the next step was to narrow down which of these reasons was the problem for Marvin.

The additional blood tests returned and confirmed that Marvin’s blood cells were fine.  Equally his liver parameters were only mildly increased and so it was unlikely that he had liver disease. So it seemed likely that Marvin had a problem with his bile system and we needed to check his gall bladder to see what this might be.

Marvin’s condition was deteriorating quite rapidly and he now hadn’t eaten for several days, something that always tends to worsen conditions in cats.  We needed to get some nutrition into Marvin as well as establish more specifically his condition and start the correct treatment. As such we elected to anaesthetise him to perform an abdominal ultrasound scan and to place a feeding tube so we could provide him with food directly into his stomach. We knew he was very unwell and that this would be a delicate anaesthetic, however we decided that it was necessary to proceed otherwise he would continue to decline.

Marvin had his procedure that day.  The scan showed his liver appeared normal but that his gall bladder, where bile is stored, was quite enlarged.  Using the ultrasound image to guide us we managed to navigate a needle into his gall bladder so that we could take a bile sample for culture and analysis of the cells contained within it.  We then placed a feeding tube and woke Marvin up.  We were pleased that we had achieved everything we wanted and that Marvin was recovering nicely and so I left him in the capable hands of the nurses and stepped away to update his owner.  However, when I came back into the room he was surrounded by numerous nurses and vets!

Marvin had stopped breathing suddenly whilst recovering from his anaesthetic but the team had picked up on this immediately.  He was ventilated with oxygen and his vital parameters were monitored closely. After what seemed like hours of monitoring and assisted ventilation, but was actually just a few minutes, Marvin started to breathe by himself and around half an hour later he was sat up in bed and apparently wondering what all the fuss was about.

With Marvin in a stable condition, and our nerves having settled, we started to test and use his feeding tube. Specially-formulated liquid food was used to feed him small quantities every hour or two, other supportive intravenous medications were started and we made sure he was as comfortable as he possibly could be.  The next stage was to await his results.

The lab analysed his sample urgently knowing how poorly Marvin was.  The results showed that his bile contained an abundance of white blood cells and bacteria.  The culture then isolated the bacteria and demonstrated the most effective antibiotics to treat it.  Marvin’s diagnosis was a seriously infected and inflamed bile duct, but thankfully we now had the information to treat it.

Marvin was started on multiple medications but the change in antibiotic started to really make the difference.

Marvin was hospitalised for several days but as each day passed we started to see his cheeky character return.  His owner is an experienced nurse and so he was able to go home sooner than some as she could continue his special tube feeds in the comfort of his own surroundings.  However, it wasn’t too long before we saw him again, but this time it was because Marvin had started to eat well himself and as such had become irritated with his feeding tube.  He had decided that he was going to take it out and so we felt it was best that we did this before he did it!

Marvin has now returned to his normal level of rude health.  His family are delighted to see the return of his mischievous ways and usual attitude of superiority within his house, both with the pet and the human inhabitants!