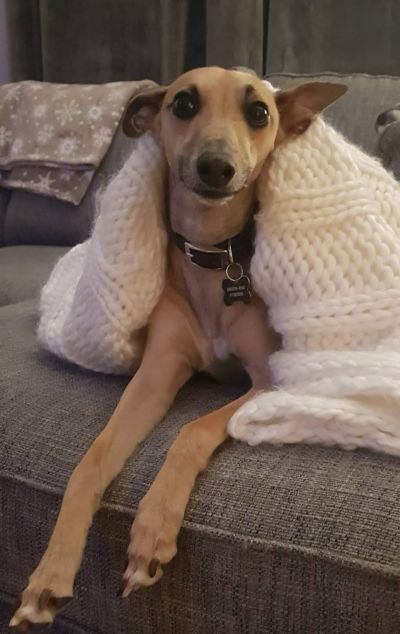 Fearne is a lovely little 2 year old whippet who came to the practice during the lockdown period with a primary complaint of reducing mobility and reduced ability to exercise. She is normally a very bouncy and lively dog and like any whippet extremely quick once she gets going. Her owners had noticed a change that started mildly around the time lockdown began and had been gradually worsening over the course of a few weeks.

Whereas previously she had been able to bolt up and down the stairs she had now developed marked stiffness and tentativeness when moving which was worst in the mornings. The owners reported a bunny hopping appearance at times and she had become lame on her right front leg. She was eating and drinking normally and toileting normally. Whilst we see many lameness' on a day to day basis, the length of time this had been occurring in Fearne and the fact that it was getting worse suggested this was not just a straight forward soft tissue (ligament/tendon) injury and further investigations were necessary.

When watching her walk it appeared as if she were 'walking on eggshells' and there was a large swelling of the right elbow. She had no neck or spinal pain which ruled out a spinal issue, but was uncomfortable in both front and back legs when examined.  So with back and spinal issues unlikely, that left us with a condition or conditions affecting all 4 legs simultaneously. Fearne was admitted the same day for x-rays of her legs to assess the bones and joints and try to figure out what was going on.

The x-rays showed us that her bones appeared normal but that multiple joints, not just the right elbow, had swellings. We were able to sample the swellings of the affected joints which included both her stifles (knees) and elbows and send these off for analysis. They came back showing severe inflammation but no bacteria or other infectious agents were seen. This would fit as normally when an infection is the cause of joint swelling and pain it usually only affects 1 joint whereas Fearne had multiple joints affected. So what we could tell then was that Fearne had a polyarthritis - literally meaning many (poly-) inflamed joints (-arthritis). There are only a handful of conditions which can cause this, almost all of which fall into the category of autoimmune disease i.e. where the immune system itself malfunctions and attacks the joints. This can be triggered by an underlying cancer, intestinal disease or a distant infection (including Lyme's disease) elsewhere in the body.

As is often the way with these cases, neither of these 3 causes could be found, and so we termed the polyarthritis as idiopathic (which basically means we don't know why it happened!). Indeed, 90% of such polyarthritis's are idiopathic. The condition is similar to rheumatoid arthritis (RA) in humans except that in RA you get erosion of the bone and joint tissue where as this does not happen in idiopathic polyarthritis in the dog (interestingly dogs can get genuine RA but this accounts for only around 1% of polyarthritis cases). Luckily the treatment for such cases is simple and effective. As it is an immune system problem, immunosuppressives are used to dampen down the immune response and prevent further attack on the joints. Fearne was started on a high dose of steroids that we have been slowly reducing over the course of the following months.

She is responding extremely well and is back to bolting up and down the stairs as before. She's currently 2 months into a 4 month treatment course and is checked over prior to every reduction in her steroid dose to ensure it is safe to do so - if the steroids are dropped too quickly Fearne may have a relapse of her condition and have to start the course all over again. All in all us and her owners are very pleased with her progress and expect her to be off all medication and back to full health at the end of her course.