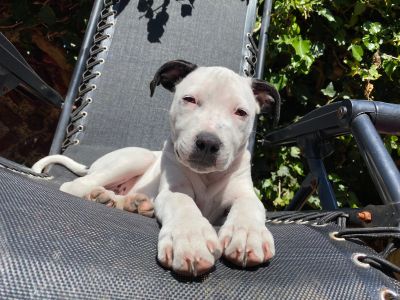 Rosco eats a not so healthy snack

Five month old Rosco was only doing what puppies do best, sniffing around and trying out anything that he could find. Unfortunately, Rosco came across some sultanas, and thinking that they smelt quite interesting, he quickly chewed and swallowed them.

Whilst sultanas, raisins and grapes might seem like a reasonably healthy snack for us humans, the story for dogs is quite the opposite as they can be incredibly toxic. The trouble we have in veterinary medicine is that we just don’t quite understand yet, exactly what part of the sultana (or raisin or grape) is so toxic, nor have we been able to quantify what the toxic dose is. The difficulty is that the effect can be so variable, whilst one dog may eat a handful of sultanas and show absolutely no clinical effect, another dog may eat one single sultana and end up in kidney failure. So it’s best to err on the side of caution and treat every sultana, grape or raisin consumption as very serious.

After some panic Googling and realising the seriousness of what had occurred, Rosco’s lovely owners phoned me on a Saturday night to explain their predicament. The phone call was brief, we all knew Rosco needed to be examined and treatment needed to commence as soon as possible, in order to give him the best chance of recovery and to avoid ‘acute kidney injury’.

With any toxicity, if ingestion has occurred within 3-4 hours of the veterinary consultation, we are able to give an injection under the skin that very quickly and effectively induces vomiting, bringing up the toxic substance and thus hopefully reducing the amount absorbed in the stomach and small intestine into the body.

On arrival at the practice, nurse Sue had everything prepared, we examined Rosco and he was completely normal which was a good starting point! Inducing sickness was not an option for Rosco because too many hours had passed since ingestion. In his case we went straight for high rate intravenous fluid drip, we were effectively pumping his little body full of fluid to encourage his kidneys to process and ‘flush out’ the toxins. The first wee is always exciting in these cases as this shows us that the kidneys are able to function to some degree. No passage of urine (known as anuria) is a poor prognostic indicator.

We also took a blood sample to check his electrolytes and kidney values to assess whether there were any early signs of kidney damage and to set his baseline values. Thankfully the first sample was normal but often the toxic changes can take up to 72 hours so we repeated the blood tests every 24 hours.

The final protective measure taken to reduce the toxic load was charcoal meals for the first 24 hours. Charcoal is an effective adsorber, which means any toxin in the stomach and small intestine binds to the charcoal and passes out in the faeces, rather than it being available for absorption into the body where it can have damaging and life threatening effects. We added charcoal liquid solution to each of Rosco’s meals and he gobbled it up with delight and covering himself in it in the process!

Rosco spent just under two days with us at the practice, receiving a lot of fluid, going outside to pass a lot of urine and winning over all of our hearts with his gorgeous, playful nature. Fortunately each of his daily blood samples were consistently within a normal range indicating no significant damage to his kidneys and he was able to go home, back to his owners who had missed him terribly!