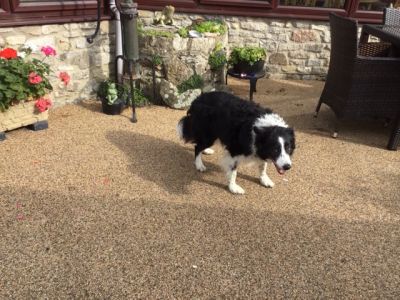 As humans, we are aware of the very real threat of breast cancers, and the need to check regularly for lumps that may appear in breast tissue. But as pet owners we also need to be aware of checking our female dogs’ mammary glands for masses, especially if they have not been neutered or were neutered later in life. Tag’s owner fortunately spotted a mass early on and she was soon dealt with to make sure it wasn’t a problem.

Tag is a rescue collie, and as with most rescue dogs it can be difficult to know an exact age – she is at least 7 and a half! Her owner noticed one day that there was a lump by her teat, and promptly had her checked out at the practice. There were concerns that due to the location of the lump, and due to the gritty classic feel of the mass, that this could be a breast tumour. Tag had been neutered, but this was later in her life. There is plenty of evidence to suggest that earlier neutering of bitches, i.e. before their third season, prevents risk of these mammary masses developing. Due to the timing of her previous operation being a little later on than this, it meant that mammary tumours were still a risk to Tag.

For this reason, Tag was booked in for an operation to have her affected mammary gland remove – a ‘mastectomy’. A general anaesthetic was required for this but she was in otherwise good health and the benefits of the surgery outweighed any risk. On the morning of her surgery, Tag had her chest X-rayed – this was to rule out secondary spread (metastases) of a mammary tumour to the lungfields. Fortunately, her chest X-rays were clear and she could proceed to theatre for her surgery.

Surgery was performed to remove her mammary gland – all of the tissue including the lump and teat were sent, in a pot of formalin, to the lab for ‘histology’ testing. This would reveal the nature of the mass, and whether it was a benign tumour or a malignant cancer. In bitches, the ratio of benign tumours to malignancy is 50:50, so everyone had their fingers crossed. Tag had her wound sutured up and was discharged from the practice on the evening of her surgery.

Tag was resting and recuperating at home for at least 10 days whilst her wound healed. Before she had her sutures removed and was signed off though, Tag’s owner waited nervously for her results. When the call came, the results were in and luckily it was good news all around. Tag’s tumour was revealed to be an ‘adenoma’ – a benign mass that had been completely removed, meaning that surgery was curative for her. Due to her quick thinking seeking our a prompt diagnosis and treatment, Tag’s owner could relax and enjoy more time with her – but will be on the look out for further lumps again in future.