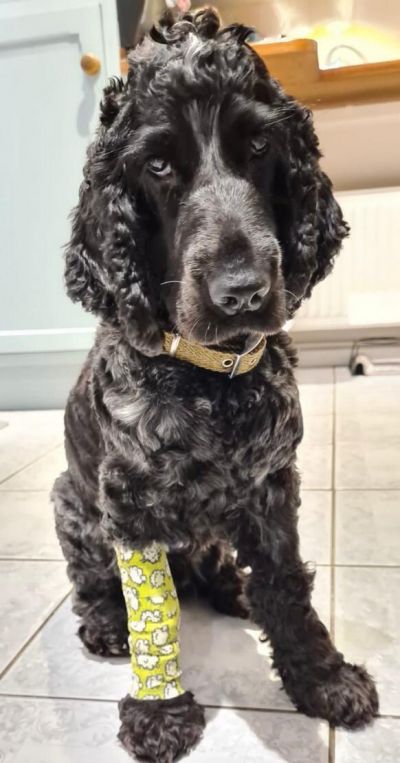 Pet of the Year Finalist 2020: Staff dog helps a Buddy out

Unlike in human medicine where everyone is aware of blood transfusions and their usefulness, blood transfusions in veterinary practices (including our practices) are performed much less commonly. They are not a definitive treatment but allow us to ‘buy patients time’ for other medicines to work or other treatments to be sought. Since joining Shepton (and now Wells) vets in 2017 I can only think of 3 occasions where a transfusion has been needed and performed; hence a newspaper article often follows!

Blood is made up of a number of components – red blood cells (RBC), white blood cells, platelets, proteins etc… The main reasons for needing a transfusion are direct loss of whole blood i.e. active bleeding, or loss of essential components within the blood without bleeding. The latter sounds a bit odd but many conditions exist where despite no bleeding essential blood components become dangerously low. A prime example is where the immune system actively targets and destroys red blood cells so that whilst blood volume remains the same, red blood cell levels rapidly decline and the patient becomes anaemic. Additionally certain bone marrow conditions can mean blood cells are not produced in adequate numbers. Difficulty can arise when you are presented with an animal that is anaemic, but you are unsure if there is active bleeding or some other condition causing low red blood cells.

[Text Box: A very poorly Buddy receiving his life saving blood transfusion.] Buddy was a 5year old cocker spaniel who presented initially with being ‘not quite right’. He had a mild temperature on examination but also had developed some small blood spots on his gums called petechiae. Petechiae are indicative of dysfunctional or low platelet levels – one of the essential components of blood. Without platelets, blood is unable to form clots and heavy bleeding will often occur all over the body. Low platelets levels were confirmed in house by looking at the blood under a microscope.

The most common cause of low platelets (especially in a cocker spaniel) is destruction by the immune system, and Buddy was immediately started on steroids to reduce this destruction and prevent any bleeding. Despite treatment the percentage of his blood made up of red blood cells dropped from a healthy 53% down to a dangerously low 13% over the following 5 days. This rate of decline was concerning and it showed no signs of stopping. Oddly, despite this life threateningly low level of red blood cells Buddy now seemed to have normal platelet numbers. This meant the continued drop in RBC levels was unlikely to be due to active bleeding because he now had adequate platelets to prevent this.

Buddy had developed another problem – his immune system was now targeting and destroying his RBCs, not just his platelets. This combination of platelet AND RBC destruction is termed Evans Syndrome. Typically the platelets destruction stops very quickly in response to steroids, hence normal platelet numbers were seen only a few days later. Conversely Immune destruction of red blood cells takes longer to stop so we had to ‘buy Buddy some time’ to allow the steroids to work and prevent further RBC loss. Luckily a number of staff members have dogs which fit the criteria for blood donation: >25kg, 1-8years old, good temperament. My own dog kindly volunteered herself on the promise of double dinner that night and 500ml of her blood was collected and transfused immediately into Buddy. As a one off transfusion in dog’s blood typing is not required, however had Buddy needed additional transfusions then blood types would have been checked. The transfusion raised Buddy’s RBC count from 13% back to a much safer 28% and a second medication was added alongside the steroids. Buddy’s RBC level stayed around the 28-30% mark for the next few days before finally beginning to climb back up to a more normal level.

We are currently in the process of slowly reducing his medication doses down and we hope to stop them completely in a couple of months. His last measured RBC level was 50% and in himself he was back to 100%.