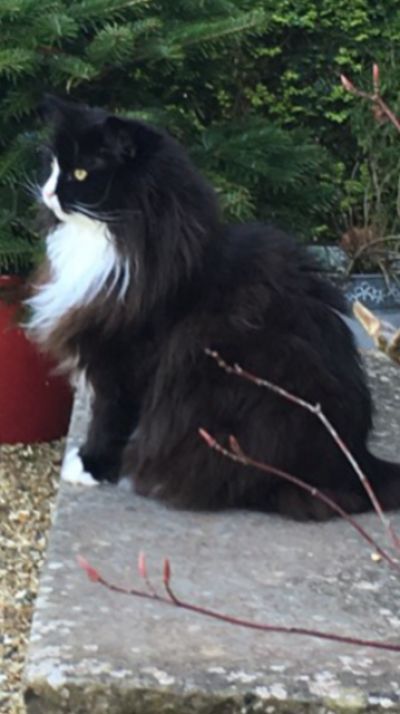 This magnificent lady is Purdie. Incredibly, she has been diabetic for over nine years. Her owner manages this at home with injections of insulin twice daily, and we see Purdie for regular checks.

Recently, she came to see me for a check up and her owner asked me to check her teeth as she had noticed that Purdie was just swallowing her dry food, rather than chewing it. This is often a subtle sign of mouth pain in cats, and so I wasn’t surprised to see that her owner was quite correct and her teeth did need attention. I could see at least one of the canines (the ‘fangs’) needed extraction. Some of the other teeth had some calculus on them (a thick, hard deposit that builds up over time) and areas where the gums were sore, suggesting more teeth may have to be extracted.

Obviously, this needs to be done under a general anaesthetic in our patients, and it’s always considered carefully as many of our dental patients are mature or elderly. With a diabetic, we take some extra precautions, and as a first step, I did a blood test on Purdie to check her fructosamine – this is a substance in the blood which gives us an idea of how well the glucose level has been controlled over the past couple of weeks. The result was a little high, showing less than perfect control, so before booking Purdie in for dentistry, we tweaked her insulin dose and then retested the fructosamine which had improved.

On the day of her procedure, Purdie was checked on admission and then settled into the cattery. She had been starved so her glucose level was tested (we can do this via a ‘prick’ test with just a drop of blood), and she was given half her normal dose of insulin. She was then placed on an intravenous drip controlled by a pump so we could accurately set the amount of fluid she was to be given. The fluids help to keep her blood pressure at a safe level under anaesthesia and also give her a small, steady supply of glucose.

Under anaesthesia, her teeth were carefully probed and records made on a dental chart, with dental x-rays taken as needed to look at the roots. Eight teeth in total needed to be removed. Seven were removed using a ‘closed’ method. This is possible when some bone surrounding the tooth has been lost. The teeth are carefully separated into sections using a high speed drill – just like the one we’re all terrified of! Each section has 1 root and that can then be gently elevated and removed. Cats teeth can have 1, 2 or 3 roots.

One of her large back teeth had what is known as tooth resorption, which is a painful and complicated condition peculiar to cats. Holes can appear either in the crown or the root of the tooth. Because there was no bone loss around this tooth, it required a surgical extraction. After a local anaesthetic injection to help with post-operative pain relief, a flap of gum was lifted around the tooth, and some of the bone overlying the tooth roots was painstakingly burred away so that the roots could be safely isolated and extracted. After smoothing the bone edges, the flap of gum was sutured with very fine, absorbable material.

Throughout the procedure, Purdie had her glucose monitored, as well as her blood pressure and temperature.  She recovered well enough after the anaesthetic to go home a few hours later. She had a reduced dose of insulin that evening and then was back to her normal routine the next day.

When she came for her 5 day post-operative check up her mouth was healing nicely, and she was eating very well and seemed brighter and more comfortable. I’m so glad that her observant owner spotted the subtle signs of mouth pain and we were able to deal with the offending teeth so she can tuck into her food without discomfort.