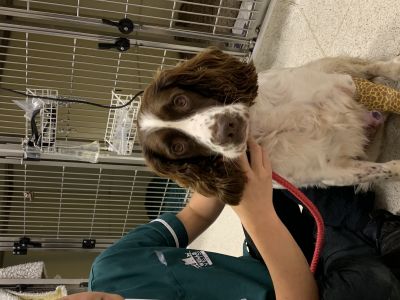 Veterinary work is full of surprises at the best of times and right now, just as for everyone else, the Covid pandemic is presenting us with all sorts of new and interesting challenges too. In fact Flash, a 4 year old Springer Spaniel, certainly gave us all a bit of a surprise as he chose to adapt to the ‘new normal’ in his own unique way!

Flash is no stranger to the practice, being one of those dogs who seems to get himself into a spot of bother on a regular basis. Typical of his breed, he approaches everything in life with 100% enthusiasm and had frequently been seen for various cuts and scrapes after racing full pelt through hedges and over fences.  He also had a naughty habit of chewing and eating toys and socks, and had been known to have socks pass all the way through his system! On the whole, he coped with these incidents very well and maintained a bright and bouncy outlook on life.

Earlier this autumn however, Flash’s owners were really worried that he was not himself. He had been vomiting on and off for two days and was becoming quite sorry for himself. When we saw him first thing on a Monday morning his owners told us he was going off his food and, when he did eat a little, he could keep nothing down. Knowing his mischievous character, they had a horrible feeling that he had eaten another sock and that it was this time causing a blockage. Once we had examined him, we were worried about this possibility too – while Flash was still fairly bright and well hydrated, he was not as bouncy as we knew he should be. Most concerning was that he definitely had a sore tummy and we thought we could feel something abnormal inside.

Flash was admitted to the surgery for us to investigate his condition further. With him sedated and more comfortable, we took some x-rays of his abdomen. These suggested that an intestinal foreign body could be present, with an unusual appearance of the intestines and a build-up of gas, but the changes were not clear enough for us to be convinced that this was the diagnosis. A blood sample told us that he was not in a critical condition as a result of his vomiting, but that his pancreas was inflamed. While this can happen as a result of the disturbance caused by an obstruction in the gut, it can also occur as a primary problem and would cause the same symptoms of vomiting and abdominal pain.

So, with Flash still under sedation, we had a difficult judgement call to make. Do we allow him to wake up and treat him for pancreatitis, risking leaving a foreign body in place and his condition worsening? Or do we proceed straight to surgery to search for a foreign body in a procedure that may turn out to be unnecessary and exacerbate his condition? We discussed this conundrum with his owners and we agreed that, on balance, our clinical findings were most suggestive of a foreign body and that surgery would be the most appropriate next step. A major factor in this decision was the fact that Flash’s owners knew him so well and felt it very likely that he had gobbled something he shouldn’t.

It was a good decision. We took Flash to theatre to explore his abdomen and were astonished by what we found. We could immediately see that he did indeed have a foreign body within his digestive tract. However, rather than a single sock causing an isolated blockage, the foreign material extended along the majority of his gut,  all the way from his stomach almost to the last part of his small intestine.

This is what is known as a linear foreign body, and can be a very serious condition. It involves the ingestion of a foreign body which becomes string-like, with one end of the string becoming fixed in a location in the gut, and then the normal movement of the gut pushing the rest of the foreign material onwards. While this may not cause a complete obstruction at first, the problem is that the linear foreign body can start to strangulate and ‘cheesewire’ the intestines, risking severe tissue damage and multiple perforations of the gut.

Thankfully Flash had not yet reached this stage and we were able to start the delicate procedure of removing the offending item from his system. Firstly, we made an incision into his stomach and found that he did indeed have a sock inside. But the sock, which was acting as the anchor, was tangled up with something else by a piece of string which was mysteriously exiting the stomach to form the linear foreign body in the intestines. We cut the string to remove the sock and then close the incision in the stomach wall. We then moved to the small intestines to the end of the portion containing the foreign material and made an incision there, gently applying pressure along the length of the intestines to move the bulk of the now freed foreign body towards the incision. As we were finally able to remove the remainder of Flash’s foreign body we discovered that it was a face mask! 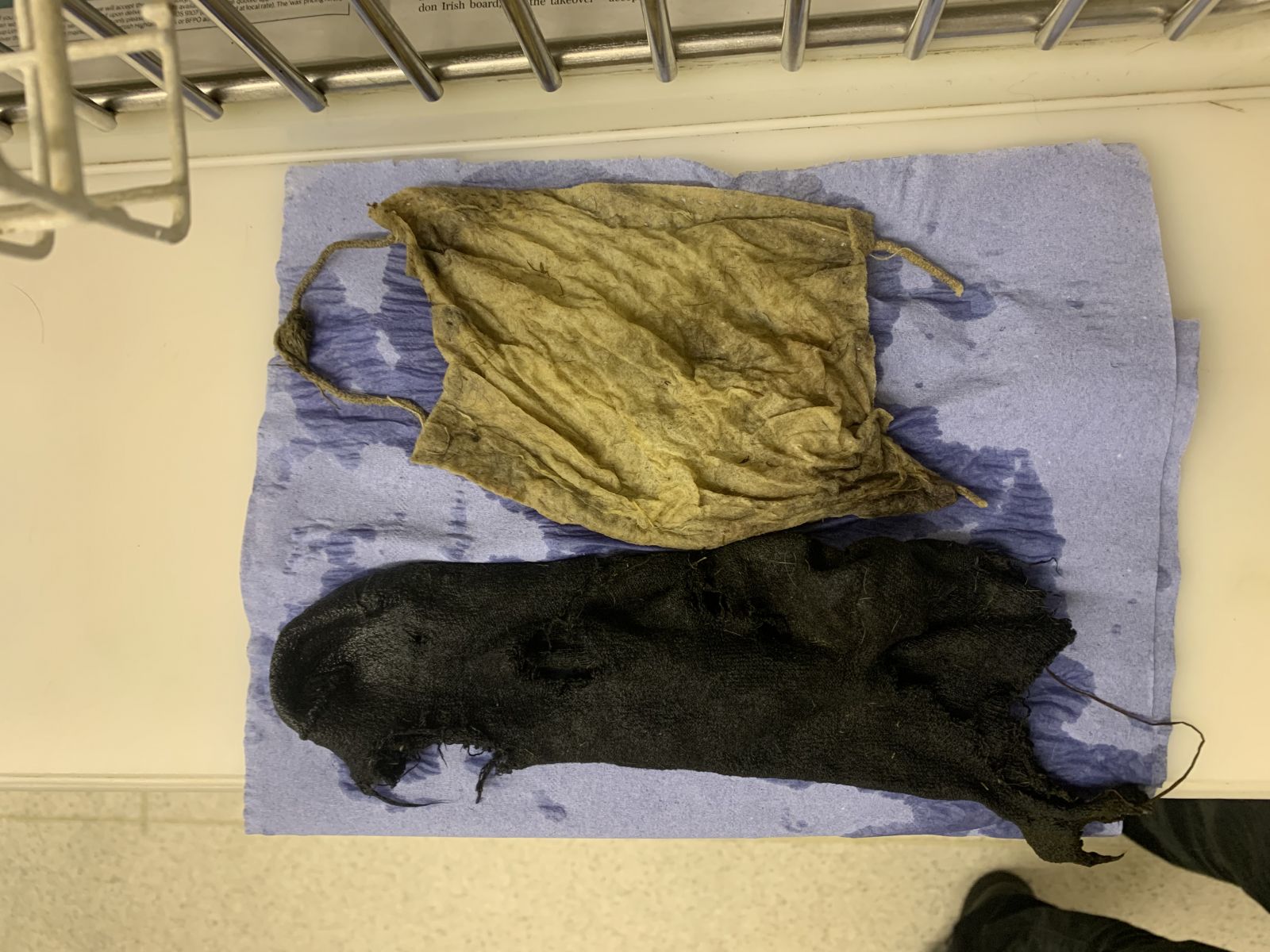 We repaired Flash’s gut wall and thoroughly flushed his abdominal cavity before closing his wounds, and after several hours of surgery he was returned to the ward to recover. He was hospitalised and monitored overnight on intravenous fluids and medication while he slept off his busy day. The following morning he already appeared much brighter and was comfortable, and over the following 24 hours his appetite gradually returned so he was able to go home. Once back at home, he quickly returned to his usual exuberant self.

We have removed all sorts from the insides of dogs before and some items, such as socks, stones, plastic toys and corn cobs, are extremely common. However this was the first face mask foreign body we have encountered, or even heard of. While face masks have always been a familiar part of life in veterinary practice, they are obviously now a common household item for us all, so we wonder if these may be added to our list of common foreign bodies. The fact remains that dogs will always be dogs, and will always manage to surprise us with their ability to consume the most unexpected of items!