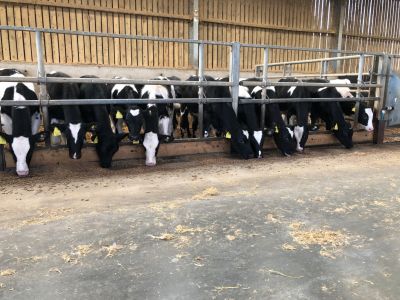 You have probably seen whilst you have been driving around, that there haven’t been as many cattle out grazing at the moment. At this time of year, the grass isn’t growing and the soil is saturated with water. Because of this we tend to keep cattle inside during the winter. Protecting them from the elements and ensuring they have sufficient food to keep them content.

However, although it means we can keep our cattle warm, dry and well fed during the cold winter months. Housing cattle comes with its own set of problems…. With more cattle in the buildings it means we have higher stocking densities, increased humidity and different ages of cattle mixing.

Recently I visited a farm that was having problems with its baby calves; a problem that unfortunately us humans, in recent times have become all too aware of. The farmer had reported his calves coughing more, becoming very sick, not wanting to eat and finding it very difficult to breath. One of the very sick calves in this group had unfortunately died of her illness.

When I visited this group of calves I could see that they were suffering from pneumonia. We performed several clinical exams of sick animals, the calves had high temperatures. When I listen to their chest with my stethoscope, I could hear significantly increased lung and upper respiratory tract noises. The sick calves also had discharge coming from their eyes and nose.

Most of the cases of pneumonia in calves are usually caused by viruses. Although after the initial infection with the virus, secondary bacteria usually invade the respiratory system. We went through this batch of calves, identifying any sick animals and treating them with an injection of long acting antibiotics and a long acting anti inflammatory drug, to make the calves feel better and help reduce their temperatures.

Although it is of course very important to treat the sick calves. The farmer was keen to make sure any new calves do not become sick with pneumonia again. For this we need to be confident that we knew exactly what is going wrong with the calves to make sure we can prevent it happening again.

As I mentioned before one of the calves had unfortunately died of her illness. We did a postmortem on her body to make sure we could confirm she had had pneumonia. We also took blood samples from older calves that had previously been sick, but had got over their infection to check their antibody levels to see what viruses they have been exposed too. Some of the baby calves had a swab passed down to the back of their nose; this is to check for  the presence of several viruses.

By knowing what viruses the calves have been exposed to it means we can then work out a vaccination program to help reduce the chances of any more calves becoming sick. This is what is going to happen to the next lot of babies on this farm.

So we increased the calves’ immune system, reducing it chances of becoming sick by vaccinating. But we also want to reduce the risk factors in the environment for the calves becoming sick. On farms we want to make sure all calves have a nice deep dry bed of straw to keep them warm and reduce aerosols in their environment, some farms also use calf coats to help keep them warm in the winter! We want to make sure all calves, receive lots of colostrum, this is the first milk that their mum will produce for them, giving them lots of antibodies and stopping them getting sick.

The calves in this group, have responded well to the treatment they were given, no more have died.

The next batch of calves, the farmer is going to make sure all of the environmental factors are minimised and the calves, probably like us, are looking forward to getting vaccinated some they don’t get sick from pneumonia.